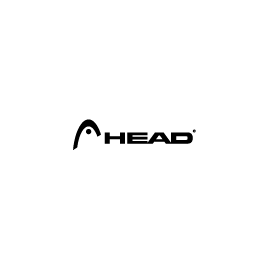 Paddle head rackets, one of the essential brands and to take into account when comparing different types of paddle rackets. Head also brings us its spectacular Head paddle balls, the most used in all the courts in the country.

Head continues to bring us this 2022 a range of rackets that keep up with its history. Head has always been a brand closely linked to tennis, but since it arrived in the world of paddle tennis, it has managed to position itself at the top of the favorite brands for all players.

This year they continue with the Alpha and Delta lines, as icons of the brand, range as a novelty Gravity, a new series for the most demanding players.

Head has been betting on the woman padel for years. One of its main icons is the couple number 2 in the world Paula Josemaría, who uses the Delta range, and Ari Sánchez, with the Alpha line. Both have been with the brand for years.

Reaching the broadest range of the public possible is one of the characteristics of Head, which manufactures cheap padel rackets so that we can all get started in this sport.

Head has a line for initiation, junior, and professionals. That covers the entire spectrum of players.

Control padel rackets typically have a round shape, which favors a more defensive style of play, where accurate hits from the bottom of the court are the most important. This form gives maneuverability and precision.

Within the Head's range is Zephir, the most controllable one.

Within the different ranges of Head, there is a wide range of prices. From the initiation rackets, which are around €90, to the Pro rackets that reach €260.

Since its foundation, the American brand has been committed to innovation and development. Every year they surprise the world with new technologies applied to reach the growth and spectacular nature of the sport.

Where are Head rackets made?

The American brand designs in the United States, but for a few years, it has been manufacturing in its factories in China.

For years, Head has had the best players in the world in its ranks. He currently has the number 2 couple on the women's circuit, Paula Josemaría and Ari Sánchez. Within the men's padel tennis, Arturo Coello is its main visible face, but they also bet on young talents such as Edu Alonso, Agustín Gutiérrez, or Joseda Sánchez.