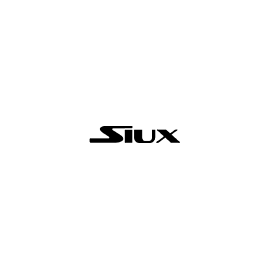 The Siux Padel Rackets incorporate the best materials and the most advanced technologies and go through a careful fabrication process to obtain a first quality product.

The Siux padel rackets are characterized by being high-performance rackets and have the best materials and latest technologies. The Spanish brand has taken a step forward in 2022 as it has managed to acquire the services of one of the best backhanders of the circuit, Franco Stupaczuk, and recently Sanyo Gutierrez, one of the best drives in the history of the padel.

As for their rackets, this year, they continue to bet on the Revolution range, where there are true icons such as the Diablo, Tsunami, or Pegasus, seconded by great blades like the Spyder or Fenix. Probably, its main novelty is the Electra ST1, Stupa's racket for this 2022.

In addition, they do not forget the initiation player and put at our disposal blades at a very good price.

Since its release in 2013, the Diablo range has been the most valuable in the Siux catalog. Within the Diablo family, there are several models, among which stand out the Diablo Grafeno, Black, or Luxury. But they all have something in common: their excellent performance on the court and exceptional design. Thousands of players have already tried it for its versatility, wide sweet spot, and quality of its carbon. Get yours now at Padel Pro Shop.

The Siux Tsunami 5.0 racket is available in 24K and 12K carbon; both offer first-class resistance and durability, standing out for their exceptional ball output.

It has a teardrop shape and high balance, making it perfect for players looking for power. The core made of EVA Soft High Recovery rubber provides manageability on groundstrokes. Its finish is matte and smooth, offering a drier and more powerful touch.

The new Siux Trilogy is a very versatile racket. It has a round shape and a medium balance, making it ideal for players looking for a perfect balance between power and control.

In the faces it has the new Gold Carbon TEX 24K of Siux, which has a softer touch and offers a spectacular exit speed.

Its core is made of EVA Soft rubber.

One of the main novelties in the Siux catalog is the new Electra ST1 that Franco Stupaczuk will use in 2022. It is a racket made to measure for the Argentine player that, with a hybrid shape, has been designed to enhance his attacking game and help him in defense, making it a very versatile racket.

Made of 12K carbon, it has a glossy and sandy finish to enhance the effect on the ball.

Undoubtedly, one of the top-of-the-range paddles of the Spanish brand in 2022.

The control paddles usually have a round shape. This mold makes them suitable for more control, manageability, and precision on the ball. It's ideal for more strategic and defensive players.

Within the Siux catalog, we can find models that would fall into this category as the Raven 18K Control, Fenix 12K, or Tsunami 5.0.

Choosing the best racket in the Siux catalog is very complicated. There is no best racket but the best racket for the characteristics of each player. We can name the Pro lines such as Diablo, Electra, Genesis, Fenix, Pegasus, or Trilogy.

Where are Siux rackets manufactured?

Siux is a Spanish brand that designs in its country but has factories in China.

What is the hardest Siux racket?

In the Siux catalogs, the 3K carbon fiber is the hardest of all, and the Siux Infernal is one of those with this carbon.